THE BERNEGAL FOUNDATION DONATES 7,000 EUROS TO THE GOVERNMENT OF MOZAMBIQUE TO HELP THOSE DAMNIFIED BY THE IDAI CYCLONE

The CANARY BERNEGAL FOUNDATION, whose mission is to contribute from the CANARY ISLANDS to the eradication of hunger, the defense of the environment and the improvement of the position of women in society, has made a donation of 500,000 meticals (7,000 euros) to the Government of Mozambique to help those affected by cyclone IDAI, which hit central Mozambique on March 14. The donation has been made through the INGC (National Institute for Calamity Gestation), which is the autonomous body belonging to the Government of Mozambique in charge of channeling foreign aid and coordinating, together with NGOs and multilateral organizations, rescue, aid and reconstruction actions. in areas devastated by the cyclone. It is estimated that this amount will be able to help more than 5,000 children

The BERNEGAL FOUNDATION, which is currently developing together with institutions of the Mozambican Government a project to develop a self-sufficient food system in rural populations, has altered its plans due to the IDAI cyclone, which has been classified as the worst meteorological disaster. in Africa and the southern hemisphere, leaving more than 720,000 children in grave danger in Mozambique, Malawi and Zimbabwe. Now, after several days, the devastating effects caused by the cyclone on March 14 have been joined by the appearance of outbreaks of cholera, which will cause the final balance to exceed tens of thousands of deaths and leave more than a million and a half of homeless people.

The donation has been made in a small event held at the Mozambique Embassy and in the presence of His Excellency. Ambassador of Mozambique in Spain, Don Jose Antonio Matsinha.

Elena Hermosilla, President of the Fundación Canaria Bernegal has stated that “the devastating impact caused by cyclone Idai, together with the strong commitment that the FUNDACIÓN BERNEGAL maintains with Mozambique, has prompted us to make this donation as well as to accelerate the development of the project of food aid in which we are working with agencies of the Mozambican Government and which we hope will have the green light in the coming months ”.

For his part, Ambassador Matsinha thanked the donation made as well as the effort that the BERNEGAL FOUNDATION is carrying out in Mozambique and has encouraged Spanish public and private organizations to contribute funds through the INGC to mitigate the tragedy caused by the cyclone. IDAI.

For information and channeling of aid to the victims, the Embassy of Mozambique has made available the telephone line 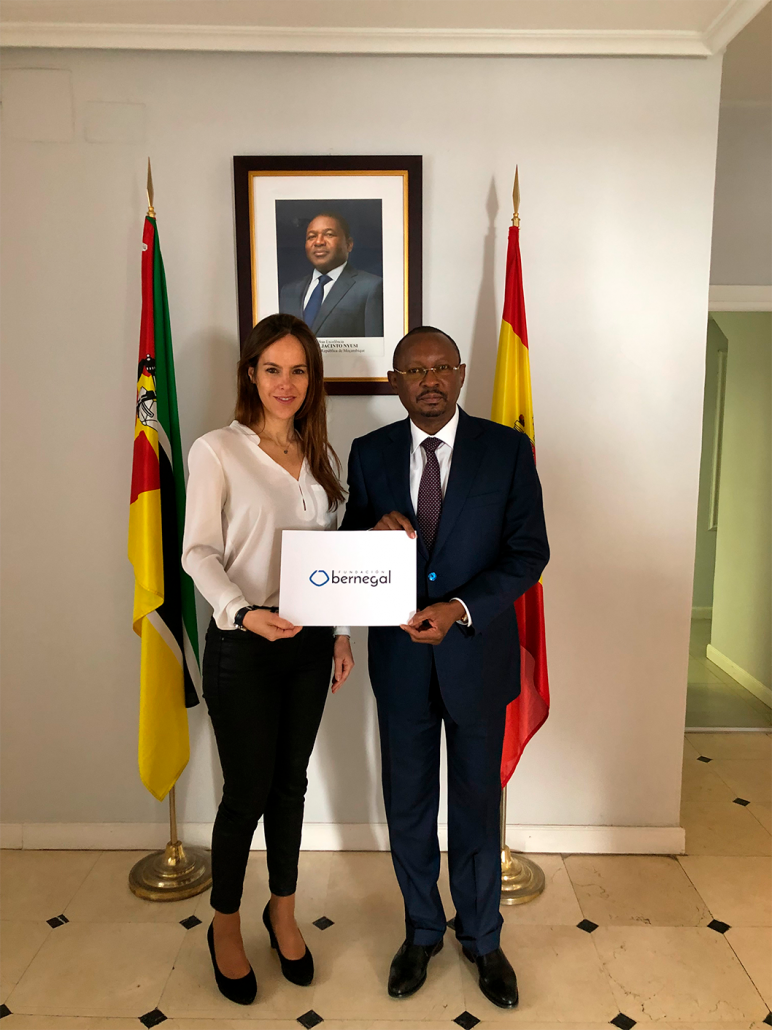 The Canary Islands Bernegal Foundation’s mission is to contribute from the CANARY ISLANDS to the eradication of poverty and hunger in the world, to promote the defense and improvement of the environment and the promotion of programs and policies that contribute to the improvement of the position of women in the society and equal opportunities.

The Bernegal Foundation also aims to support the technological development of the Canary Islands, as well as to promote and disseminate Canarian culture throughout the world.

The Bernegal Foundation began its activity in 2019 with a sustainable food program for Africa, Mozambique being the first country where its implementation is taking place.

THE ULPGC AND THE BERNEGAL FOUNDATION SIGN AN AGREEMENT FOR THE DEVELOPMENT...
Scroll to top